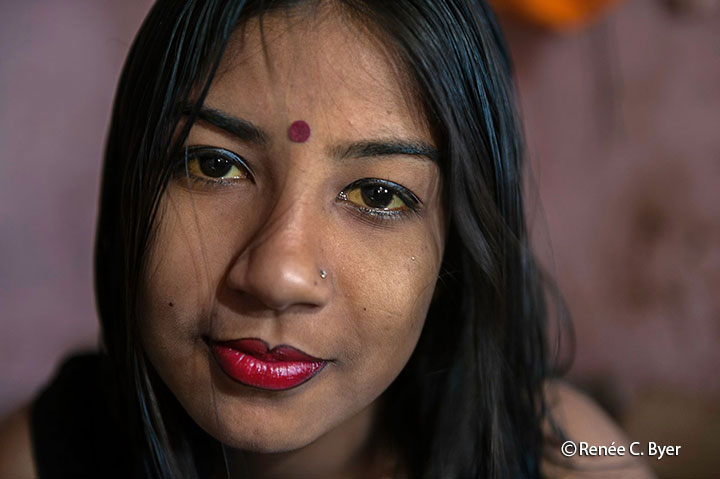 Nupur, 20, is featured in "Living on a Dollar a Day". She has resorted to working a Bangladesh brothel. 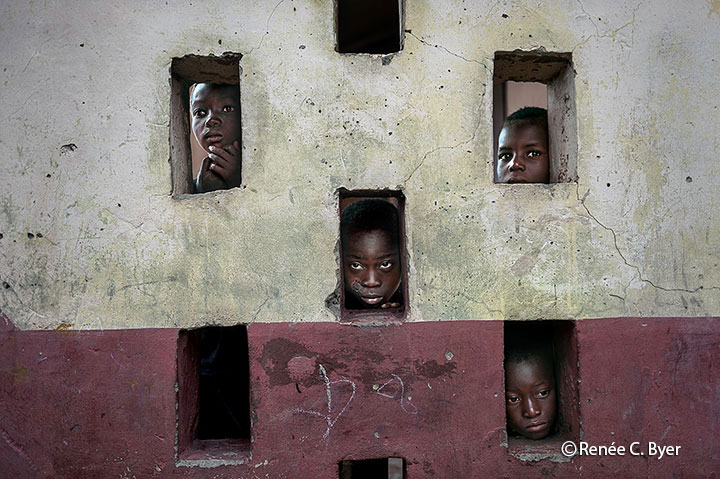 Children in Ghana wait out the rains while they are herding cows. Their stories are told in "Living on a Dollar a Day". 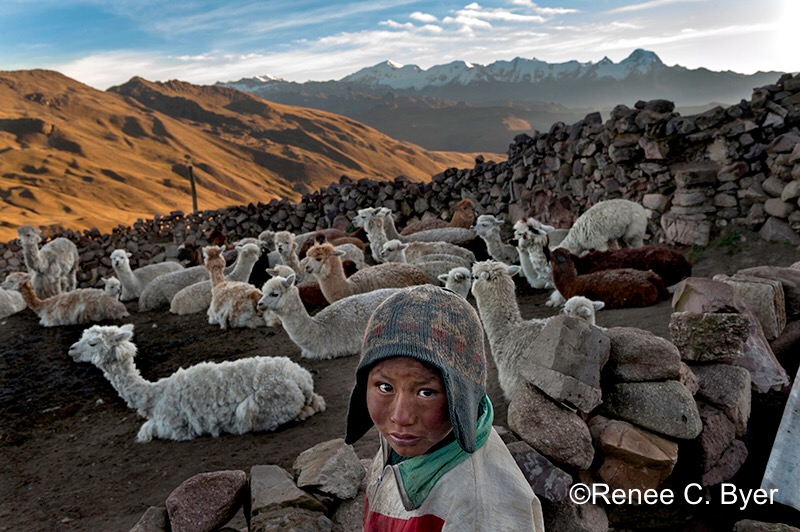 Alvaro Kalancha Quispe, 9, opens the gate to the stone pen that holds the family’s alpacas and llamas each morning so they can graze throughout the hillsides during the day. He then heads off to school, but must round them up again in the evening for this is the work he does for his family. Photo taken May 27, 2011 in the Cayuyo area about an hour from Qutapampa, Bolivia. In the background is the snow-capped Apolobamba Mountain Range 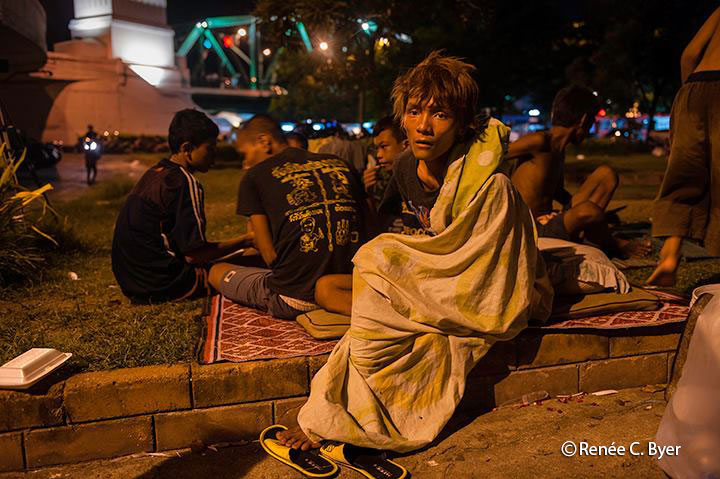 Homeless children on the streets of Bangkok. Many of them are addicted to sniffing glue to suppress their appetites. Their stories are told in "Living on a Dollar a Day." 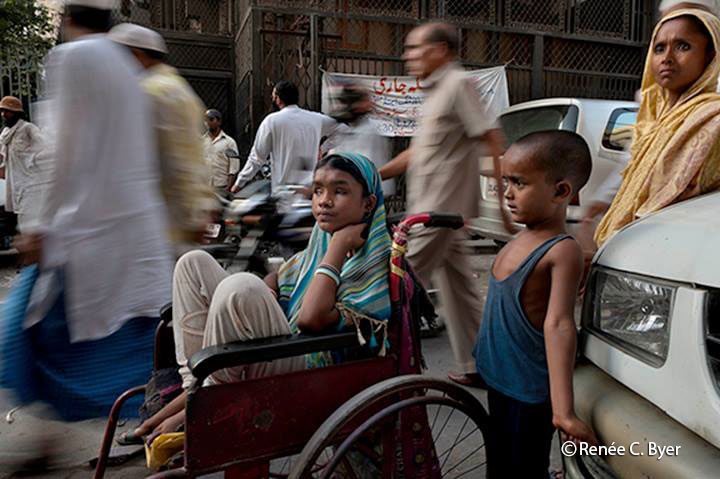 Hunupa Begum, center, is the source of her family's income through what she can raise by begging on the streets of New Delhi. Her story is featured in "Living on a Dollar a Day'. 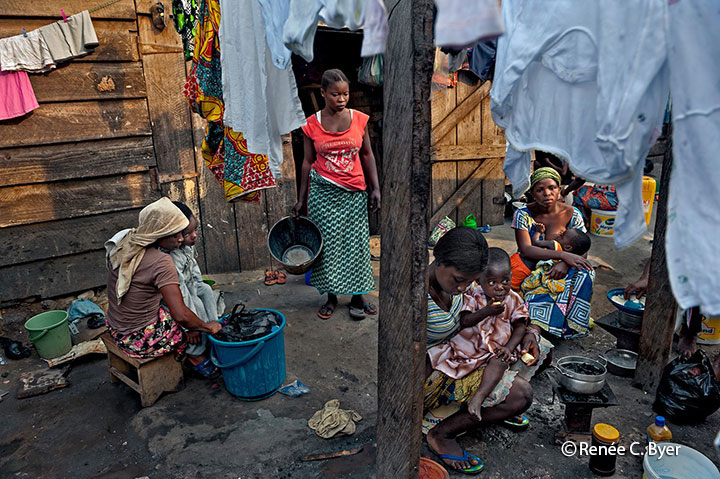 A communal housing center in Accra, Ghana, for the girls and women who spend their days working as porters. Their stories are featured in "Living on a Dollar a Day." 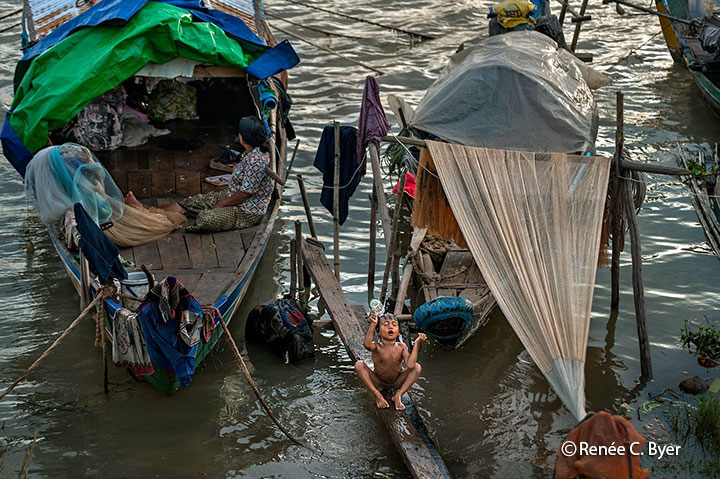 These families live and carry out their activities on their small boats in Phnom Penh, Cambodia. You Hai Yati, center, is bathing in the Mekong River. Her and her family's story is featured in "Living on a Dollar a Day". 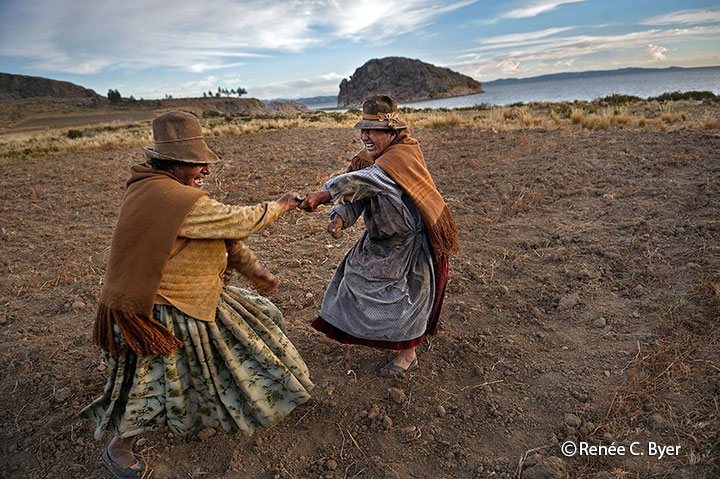 Dominga Illari, 70, and Manuela Quispe Avile, 70, dance after harvesting potatoes in Bolivia. They are featured in "Living on a Dollar a Day". 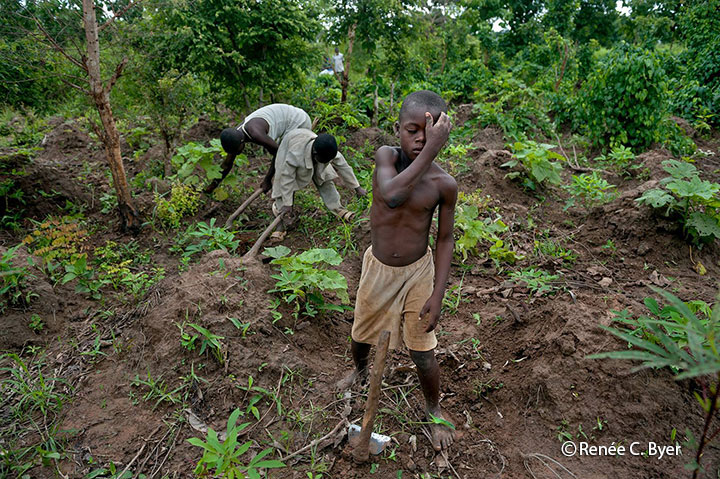 Kwame Joshua, 6, works on his family farm in rural Ghana. His story is featured in "Living on a Dollar a Day."

Too often those of us who live comfortable lives miss the entire spectrum of humanity who share our planet in lives of desperate poverty. This book brings all of us closer.
—Robert F. Kennedy, Jr.

Our award-winning book, Living on a Dollar a Day: The Lives and Faces of the World’s Poor tells the stories  in words and images of the 1.2 billion people on Earth who have struggle to survive on less than one dollar a day. In creating this book we captured profiles of more than 40 individuals and families from 10 countries around the world and addressed the factors that both bring about poverty as well as help mitigate its consequences. The book details the difficulties of subsistence agriculture, access to health care, women’s social status, child labor, and worker’s rights.

Honors for Living on a Dollar a Day 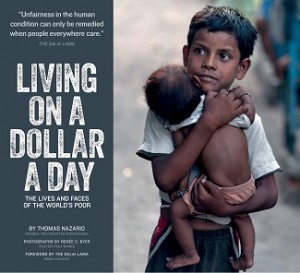 See Press for Living on a Dollar a Day

Find the book through IndieBound, at your local bookstore or on Amazon 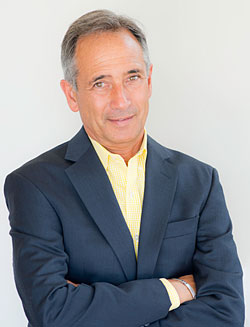 Thomas A. Nazario is the founder and president of The Forgotten International, a nonprofit organization that does poverty alleviation work in several parts of the world, as well as an attorney, child advocate, and law professor at the University of San Francisco School of Law. His expertise in children’s rights has led him all over the world documenting human rights violations involving women and children, as well as working with inner-city kids in the San Francisco Bay area for over thirty-five years. Through his travels he has discovered many grassroots organizations that seek to help the poorest of the poor, and he works tirelessly to provide ongoing support to these groups, as well as new organizations his foundation continues to find around the world. In addition to his teaching, Tom often makes presentations to community groups, colleges, foundations, and corporations that wish to get involved in his work. His most recent publication is called Doing Good (Rowman & Littlefield, 2017) and is part of TFI’s Compassion Education project. 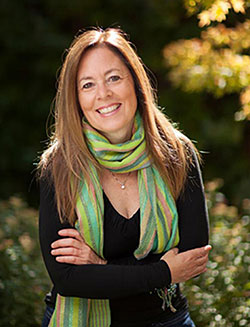 Renée C. Byer is an American documentary photojournalist best known for her in-depth work focusing on the disadvantaged and those who otherwise would not be heard. Her ability to produce photographs with profound emotional resonance and sensitivity earned her the Pulitzer Prize for feature photography in 2007 and made her a Pulitzer finalist in 2013. She has covered local, national, and international stories for The Sacramento Bee since 2003. Her work has been published in books, magazines, newspapers, and on websites worldwide and was the basis for a 2009 TEDx Tokyo talk that received a standing ovation. When not on assignment, she can be found sharing her passion for photography at lectures and workshops worldwide. See Renée C. Byer winning the 2007 Pulitzer Prize for Feature Photography.

We wish to thank the countless individuals involved in helping us make this book. It took almost four years to complete, and it was truly a labor of love. Foremost, we acknowledge our inspiration for compassionate action, His Holiness the 14th Dalai Lama, who graced our book with its Foreword. We wish to express our heartfelt gratitude to our publisher, The Quantuck Lane Press, a division of W.W. Norton, our invaluable local guides and researchers, our major donors who believed in importance of this project, and our special consultants, in particular videographer and field coordinator George Rosenfeld and book designer David Griffin. We can never fully express our appreciation to the dozens of individuals all over the world who agreed to share their lives with us when we could promise nothing in return other than to tell their stories and try to give them a voice.

Back to Build Awareness

Ila (left) served as a research fellow at the Tibetan Centre for Human Rights and Democracy in ... END_OF_DOCUMENT_TOKEN_TO_BE_REPLACED  »

As part of our second decade of operations, and in order to encourage compassion for others, we created The Forgotten International Compassion Award. ... END_OF_DOCUMENT_TOKEN_TO_BE_REPLACED  »

The Forgotten International partnered with All Heart Cosmetics to create "Compassion" a lovely nail lacquer in ultra violet. Each purchase of ... END_OF_DOCUMENT_TOKEN_TO_BE_REPLACED  »