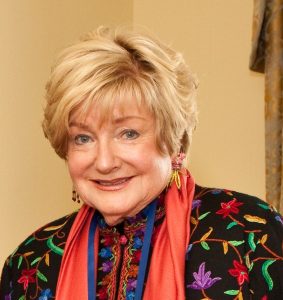 Diane Brandenburg has been a Board Member for The Forgotten International since 2009, after she met Tom Nazario at a charity event with His Holiness the 14th Dalai Lama. She was a key capital fundraiser for the Martin Luther King Jr. Library, and spent many years raising funds on the Library Council Board. She also made it possible to build the Children’s Discovery Museum and Gymnasium for the New Children’s Shelter along with her husband in San Jose. She is an active philanthropist and believes in creating a world which allows children to thrive.

Before joining TFI, Diane raised four children, adopted children through foster care, participated in local philanthropy projects, and donated to international charities. Hence, it made sense to join the TFI board when she learned about what we were achieving in the world through our grassroots programs, and what inspired Tom to first start the organization.

Diane was taught at a young age that giving back was an accomplishment. This was a value her parents, a doctor and a nurse, instilled in her. She has carried this with her, and now shares the virtue that human life is not to be wasted. She believes every person deserves a chance, and most importantly, that all living things on Earth are here for a reason. This is a value that aligns with TFI, and is a main reason Diane joined the Board.

Seeing the photographs in our Living on a Dollar a Day book by Renée C. Byer was a turning point for Diane. It made her realize this is an area where TFI could make a difference. Getting children out of trash-ridden slums, giving them medical attention, shelter, and an education are what they need most. Picturing her own great-granddaughter living under the same conditions was heart-breaking, and more motivation to support TFI’s efforts.

Diane started TFI’s Children’s Fund after being so moved by the images in the book. She has also supported TFI by raising funds and awareness through her friends and community. “Making a better life for children who are barely surviving” is the most important legacy to have.

Inspired by her grandfather Drummond who told her, “Always do your best, and then do a little better,” Diane’s parting message for TFI supporters is, “If you see something that you know would make a difference in your neighborhood, community, or world, don’t just sit there and talk about it. Get up and do something! It doesn’t have to be huge. One drop of water combined with others can make a pond.” Lastly, she is inspired by a quote shared by her friend: “The beauty is in the walking. We are betrayed by destinations.”