The Forgotten International (TFI) was founded in 2007 by Thomas Nazario while he was a law professor at the University of San Francisco. After years of traveling the world reporting on legal issues related to the treatment of children for several non-governmental and governmental organizations, Tom was encouraged to start the work of TFI after several conversations with His Holiness the 14th Dalai Lama. The foundation’s driving philosophy to create a better world is to start with women and children.

Living On a Dollar a Day: The Documentary 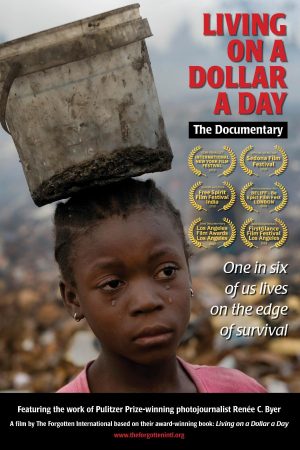 Over the last two years, many of you came to a local screening of our documentary film based on our book Living on a Dollar a Day. We appreciate your support and we’re humbled by the 30 awards and recognitions the film has received in film festivals around the world.
In early 2020, our film will be available to view online. We encourage you to share the film with friends or colleagues, tell your teen children’s teachers about it to show in their classrooms, or offer it to church groups to screen at a community event. The film captures the struggles and hopes that many of the world’s extreme poor experience every day and encourages viewers to get involved in giving and caring for those in our society who need our help. We, of course, hope that many will see this important film.

Programs We Visited In 2019 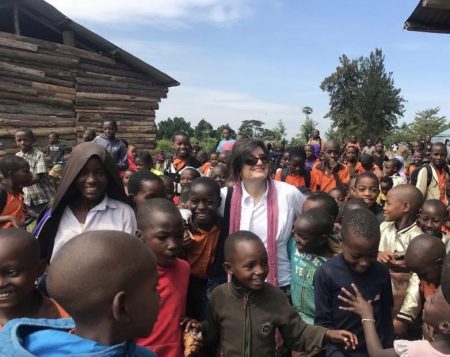 In March 2019, Jennifer Zahgkuni, our Director of Operations, visited the Angels Care School located in a UN Refugee Settlement in Kyegegwa, Uganda. The Forgotten International has been supporting Angels Care School since 2013 with various campus projects. Last year we purchased new textbooks for all grade levels because their books were several years old. Additionally, we are building a much-needed health clinic on their grounds for the students and the surrounding community through our new Medical Assistance Fund. The clinic will open in spring 2020.
Ghana 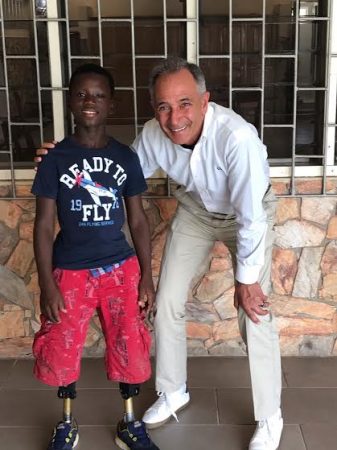 Last spring Tom Nazario visited Ghana to check up on the students we sponsor through our Eric L. Brandenburg Children’s Fund, and also visited the Orthopedic Training Center in Nsawam where he met Zakaria Awal, an orphan born without the lower halves of his legs, who has been living at the Center and attending a nearby school. TFI decided to support Zack’s education and living expenses, including his medical care. Tom also learned about a nearby birthing center, the Notre Dame Clinic. TFI made them a new grantee last year.

We have continued to support our most vulnerable students through our Eric L. Brandenburg Children’s Fund. Besides the now six young people in Ghana whose education we sponsor, we continued last year to support two students in India as they made their way through school toward a brighter future for themselves and their families. 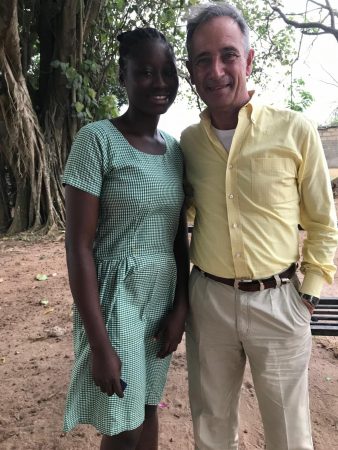 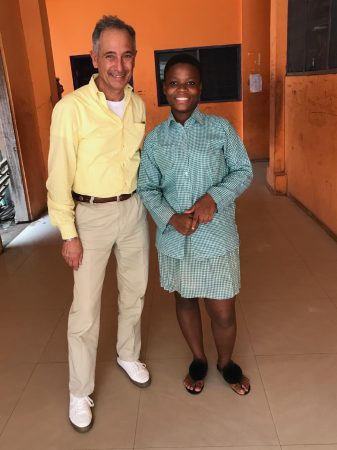 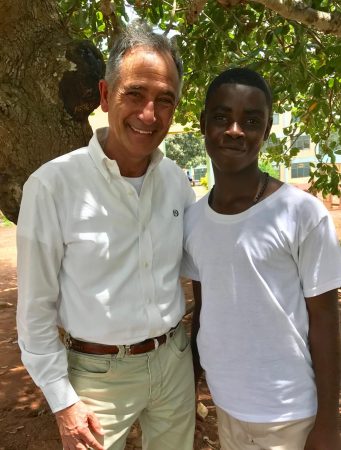 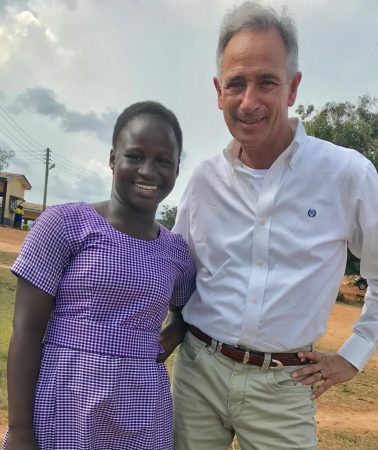 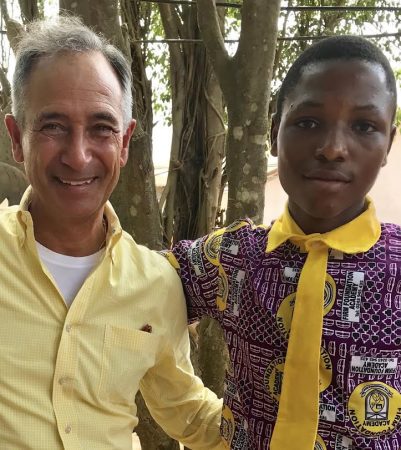 In 2019 we reached out to Bay Area high schools to expand our Doing Good program to encourage more young people to engage in their local or global communities. As part of this program, we also make available a Compassion Award. In 2019, it went to Zachary Wong (center), a high school senior, for his work in bringing clean water to schools and remote villages in Nepal. Zachary founded Water in Nepal (WIN) to further his vision in making clean water accessible to all communities. TFI gave WIN $3,000 for their good work. 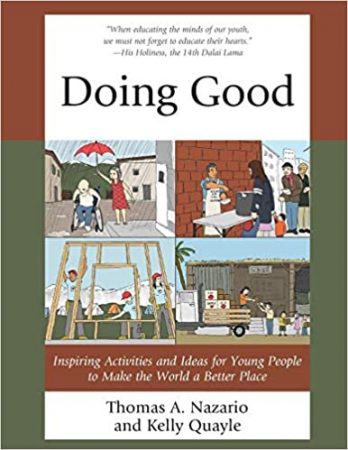 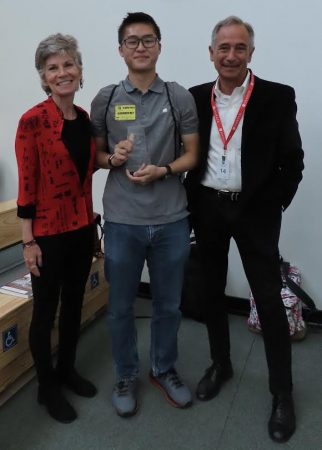 Our Human Rights and Economic Justice Fellow in 2019 served at the Tibetan Centre for Human Rights and Democracy (TCHRD) in Dharamsala, India. Ila Rutten (left), a recent Master’s graduate focused on international affairs, spent two months researching and writing a report on human rights abuses in Tibet that will be included in the Centre’s Annual Report. Ms. Tsering Tsomo (right) is the Director of the TCHRD. 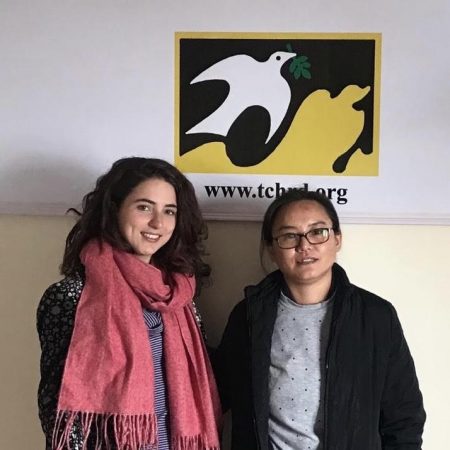 n 2019, TFI expanded our Fellowship Program to include older adults, and in doing so, we arranged for five dedicated professionals from BNP Paribas Bank in New York to go to a school and orphanage in Peru called La Sagrada Familia. The group spent two weeks lending their time and expertise to help all aspects of the orphanage, from helping to serve meals to over 1,000 kids, to creating accounting software, to designing a new website. They also created an action plan going forward and raised $60,000 among all the bank’s employees to assist this community. 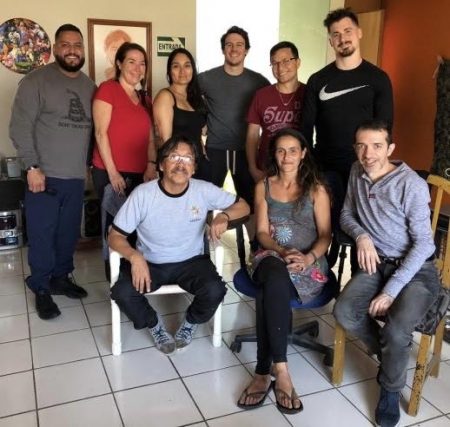 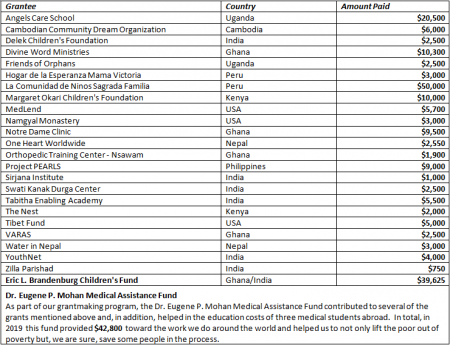 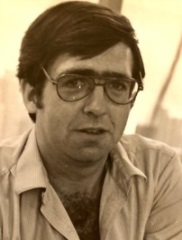 Spearheaded by new Board Member, Jerry Mohan, the Mohan Fund was launched in 2019 in honor of Jerry’s brother, a dedicated surgeon, Dr. Eugene P. Mohan. The fund last year supported three students in medical training, provided grants to two health centers, and is building a new clinic for refugees that will open in 2020, all in under-served areas in Uganda and Ghana. We are grateful to Jerry and his wife, Beth, for making these opportunities possible through TFI. We have requests pending for 2020 that we look forward to considering.

Judi Feeley is a Global B2B Sales Executive with more than 25 years of successful experience accelerating the revenue growth of technology companies in the United States, Europe, and Asia Pacific. Judi brings her years of professional expertise to The Forgotten International’s Board.

Thibault Gerbaldi was born and raised in Paris, France. An engineer by training, Thibault worked for BNP Paribas in New York for four years before joining Tudor Investment Corporation as a portfolio manager in 2013. Thibault has dedicated time to charity work in France, Peru, and New York before joining TFI’s Board.

In looking ahead toward our work this year, there are three projects that, above all others, can certainly be considered new and exciting for us to embark upon. First, our documentary Living on a Dollar a Day will be going out to the public via different platforms, largely targeted to high school and university students around the country. Second, we will be completing the building of a health clinic in Uganda for mainly refugee students who attend the Angels Care School and have traveled to Uganda from neighboring countries as a result of the trauma they were experiencing there. Third, in the fall of 2020, we look forward to opening a school in Ungutur village in India that, with the help of one of our Board members, will serve some of the poorest kids in the region and, for the first time, give them a decent chance for a good education at a modern facility. We hope this school will serve as a model for other communities.

All of this was made possible through your kindness and compassion.

Thank you for your support!