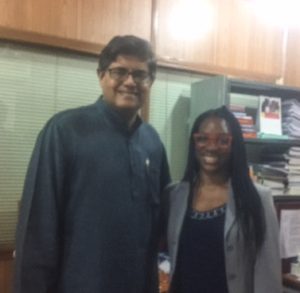 Davina served with the Parliament of India in New Delhi, India in Fall 2016.

From October to December of 2016, I was fortunate to work as a legal and policy fellow with the Mr. Jay Panda, who is a member of the Parliament of India during India’s Winter Parliament Session. As an attorney working in the international labor and anti-human trafficking field, I was especially excited to work with Mr. Panda and his team as they have done great work towards the eradication of labor trafficking in the brick kilns of Mr. Panda’s constituent district of Orissa. He not only wrote on the issue in his monthly op-eds in the Indian Times online newspaper, where he called for the national government to take action, but he has also taken the time to make multiple visits to affected districts in order to speak to the people about their concerns with the issue surrounding forced labor.

Mr. Panda and his office are also dedicated to interacting with as many of the youth as possible. Several times during my fellowship, Mr. Panda engaged with students of all educational levels with the focus of how they could use their education and skills to positively affect their country. For example, a group of college students studying law, medicine and engineering had teamed up to create detailed legal analyses and proposals on the subjects of Tobacco and speech censorship.

During my time with Mr. Panda’s team, I wrote two private member bills proposing to amend both the Anti-Child Labour Law and the Anti-Bonded Labour Law to include sections that required Companies in India to take progressive steps toward ensuring there is no slave labor in their supply chains. Further, I had the opportunity to complete a multitude of briefs on a variety of subjects, including Prime Minister Modi’s demonetization order, the effects of the U.S. elections on India’s policies, and the ongoing border issues between Pakistan and India, especially as it pertained to Kashmir.

Finally, I had the privilege of attending conferences and meetings to discuss a myriad of topics. Mr. Panda’s office partnered with the regional chapter of the international organization, International Justice Mission, to conduct a conference with other members of the Parliament of India in order to discuss the new comprehensive anti-human trafficking bill proposed by the Ministry of Women and Children. As part of the policy team, I was able to meet with other international organizations to discuss issues pertinent to current events in India. I also attended a conference in which members of parliament and national labor organizations discussed the importance of the protection of migrant workers.

The most rewarding part of working with Mr. Panda’s team goes beyond policy-writing and research. I was able to get a deep sense of how everyday people can be inspired to instigate change in their country. Mr. Panda and his team stayed connected with their constituents through active engagements such as personal visitations to each district under his jurisdiction, and publicly addressing the people’s concerns. Experiencing the level of interaction with the public sphere was my favorite part of being a Fellow in his office, and it definitely inspired me to consider the many different ways in which I can engage fellow citizens to be more involved in various levels of government here in the United States.