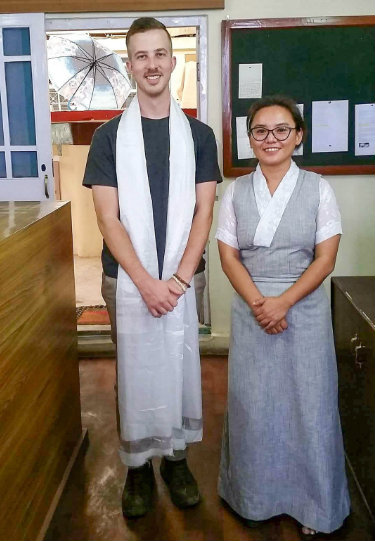 Peter served with the Tibetan Centre for Human Rights and Democracy in Dhramashala, India in Summer 2016.

Through the TFI Fellowship Program, I spent eight weeks in Dharamsala, India working with the Tibetan Centre for Human Rights and Democracy (TCHRD). As a nongovernmental organization staffed entirely by Tibetans in exile, TCHRD plays an incredibly important role in monitoring, researching, and exposing human rights violations in Tibet to both the international community and Tibetans living around the globe. As a visiting fellow, I learned firsthand the intricacies of Tibet’s long and hard fought struggle to maintain its unique culture and identity in the face oppressive government policies. In collaborating with the TCHRD staff and other Tibetan human rights defenders, I grew to understand the remarkable courage and strength each one possessed to be in their position. I also had an opportunity to share my knowledge and expertise with them in a meaningful way by facilitating a three-day workshop on human rights monitoring, research, and advocacy. The interactive presentations drew the participation of staff members from TCHRD, the Tibet Policy Institute, the Active Nonviolence Education Center, and the Tibetan Women’s Association. In addition to carrying out my workshop, I drafted a report on arbitrary detention in Tibet for print and online publication.

My experience was further enriched by working with a local monk to defend the human rights of slum dwellers at the Charan Khad slum in Lower Dharamsala. Tom Nazario, TFI’s founder and president, has prior experience working in Charan Khad, which is home to nearly 1,000 refugees from Rajasthan and Maharastra. At Tom’s request, I reached out to Jamyang, an amazingly gifted and compassionate Tibetan monk who has lifted more than 100 children of Charan Khad out of poverty through his Tong Len Hostel, which houses and provides formal education to each child. His efforts have been an incredible success. However, while I was in Dharamsala, the families of the Tong Len children – those who remained in the slum – faced the threat of forceful eviction at the hands of the municipal government. Jamyang and the older children of Tong Len were in the midst of a lengthy court battle to assert the rights of the slum dwellers when I offered my help. In the weeks that followed, I continued working at TCHRD but dedicated part of my time to building a successful legal argument in defense of the slum. This experience was impactful in so many ways. It not only gave me insight into the history of migration, resettlement, and slum dwelling in India; it offered me a glimpse into the absolute poverty that slum communities endure throughout the world, and it revealed a completely different dimension to life in Dharamsala – one in which local authorities ignore human rights and personal dignity when it is politically or economically expedient. Although the court system ultimately failed the Charan Khad community, I consider it a privilege to have worked on their behalf and I continue to collaborate with them on finding ways to use the legal system to protect them rather than harm them.

My time as a TFI Fellow was filled with meaningful experiences that will have an enduring impact on my life and career for years to come. I gained an invaluable perspective on human rights in Tibet and I developed my professional skills by working at TCHRD. In working with the Charan Khad slum, I developed a deeper appreciation for legal protections for the extreme poor. From both experiences, I drew constant inspiration from the courageous and selfless people who dedicated their lives to helping the impoverished and oppressed. I am tremendously grateful to TFI for providing me this opportunity and I recommend it to anyone who wishes to make a meaningful impact on human rights and broaden their international and professional experience.