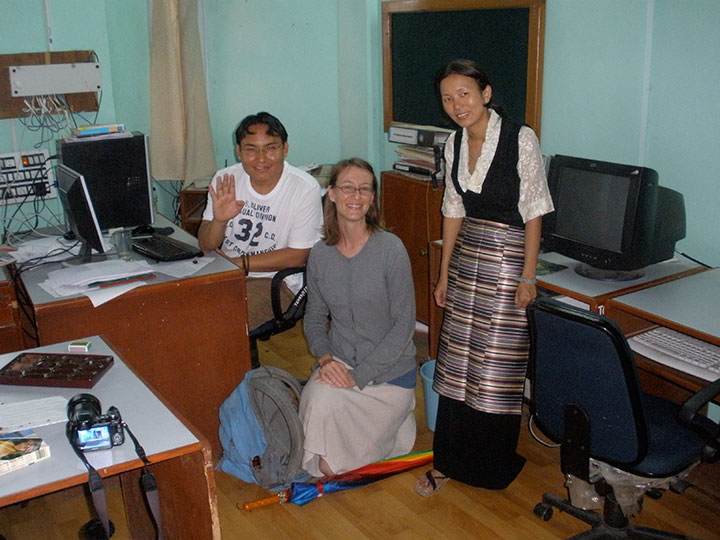 Nicole served with the Tibetan Centre for Human Rights and Democracy in Dharamshala, India in Summer 2009.

Living in Dharamsala, India, for two months was an incredible experience. It was very inspiring to see how the Tibetans have developed their thriving community-in-exile, and I was honored to be warmly welcomed within that community during my brief stay. Dharamsala itself seems to have been literally carved into the side of the Himalayas, and it was amazing to see how the community successfully co-exists with the harsh natural conditions imposed by the monsoon rains, remote location, and soaring altitude. At the center of the town and of the people’s consciousness is the home of the Dalai Lama, and it was a great comfort and cure for the occasional bout of homesickness to know that His Holiness and his temple were so nearby. One of the most memorable experiences for me was seeing the townspeople line the streets with flowers and incense offerings to welcome the Dalai Lama home after one of his many trips, and it was deeply moving to witness the happiness he radiated as he waved from the motorcade to his people.

I worked at the Tibetan Centre for Human Rights and Democracy (TCHRD), where I wrote the “Education” and “Development” chapters of their 2009 Annual Report to describe the current country conditions within Tibet. This required researching international norms and domestic Chinese law, and comparing these standards with the actual living conditions reported by refugees why had recently fled from Tibet into India. I was given the opportunity to interview many recent refugees to obtain those first-person accounts, including young children and people who had participated in the historic protests of 2008. Those interviews were an invaluable source of information about the real living conditions within Tibet, and I made a special attempt to gather information about groups under-represented in the existing data, such as women and people with disabilities. Meeting with these refugees was a deep honor and very humbling, and I think about and reflect upon that experience often. My co-workers at TCHRD were great, and I looked forward to going in to work each day for the opportunity to interact with and learn from them. Many of my co-workers were refugees and former political prisoners, and knowing this inspired me to deliver my best work to such an impressive and important organization.