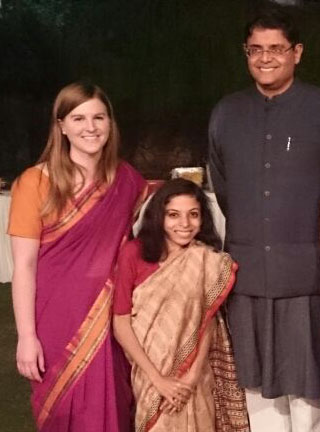 Regan served with the Office of Member of Parliament Baijayant Panda in Delhi in Fall 2014.

As a policy fellow with the Office of Member of Parliament Baijayant Panda, I was able to work on a project very close to my heart: toilets. As a student, I had learned about the water and sanitation crisis that kills 186,000 children under five per year. In fact, 21% of communicable diseases in India can be attributed to unclean water. According to the 2011 Indian Census, only 22.4% of households in Odisha, the state which Mr. Panda is from, have access to piped water on the premises, and only 22% have a latrine. The numbers are even worse for rural areas. Soon, I started conducting research on what kinds of sanitation projects Mr. Panda could implement in his constituency, particularly the village he had selected for SAGY.

I spent the first few weeks of my fellowship just wrapping my head around all there was to know and trying to figure out how we could encourage behavior change. One of my initial projects was to compile relevant statistics and write a report on sanitation for Odisha TV, which Mr. Panda’s wife works for. I pitched several campaign ideas for short advertisements that could be played in between shows on OTV.

I also conducted research on different toilet models and requested quotes from several organizations and companies. The three main types of toilets we looked at were pit latrines, ecosan toilets, and bio-digester toilets. Each had merits and limitations. On a trip to Sulabh’s International Toilet Museum, I got to see Sulabh’s bio-digester toilet model. It showed how the system could be connected to provide gas, which could be used for cooking or to generate electricity, and water, which was suitable for irrigating fields after a purification process. After an additional meeting to talk about the kinds of toilets we were interested in building, we organized a trip for an engineering team from Sulabh to visit the sites where we wanted to build.

Through this fellowship I learned more about working with the social sector in India. I met and spoke with several organizations that work in water and sanitation in order to learn more about sanitation technologies and behavior change programs. I was also able to see how those organizations interact with government officials and programs. I also learned a lot about India’s parliament when I wasn’t working on the sanitation project. By conducting research on how to improve the parliamentary system, I got a crash course on how it works currently.

I am glad that I got to work on such a broad range of topics in this position. By showing me where my strengths and interests are, this fellowship clarified some next steps for me. I am still very much committed to studying about and working in India, and I am already making plans to come back (in fact, I was told to stop talking about missing India before I have even left). I have a better idea of what I will do in graduate school, and I will start doing more research on public policy schools when this fellowship is over. Seeing how policy is made in India has also galvanized me to become more involved in politics back home. This fellowship provided an opportunity to use what I had learned in university and other activities, and it taught me even more about India than I already knew. There is so much more to learn, and I look forward to doing so.

go to fellowship program
Share this post!
PrevPreviousNews.com.au – Emma Reynolds – Heatbreaking photos show what it’s like to live on less than a dollar a day
NextThe United Nations – The Importance of Education – Women’s Entrepreneurship Day 2014 – Tom Nazario – (33:59)Next