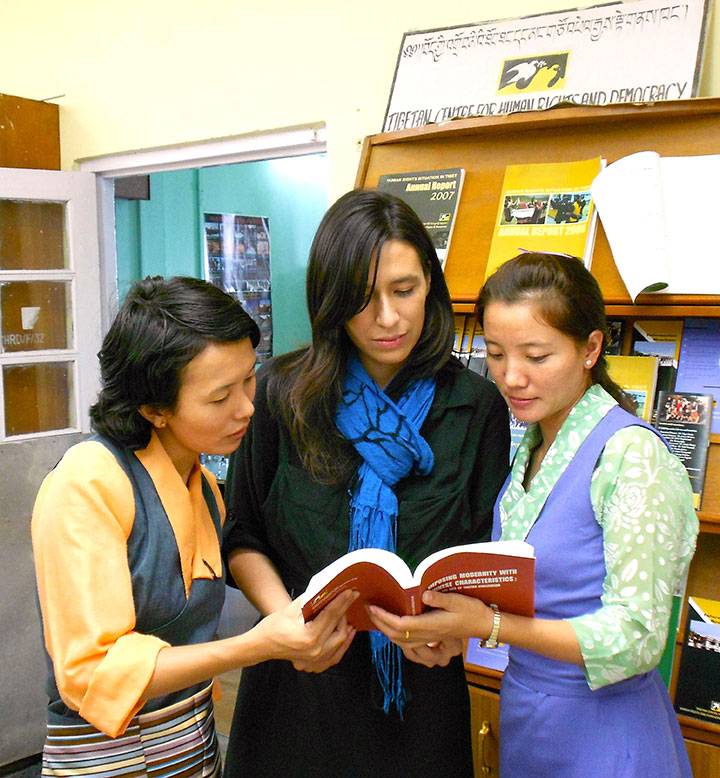 Supatra served with the Tibetan Centre for Human Rights and Democracy in Dharamshala, India in Summer 2011.

When I left for Dharamsala in June 2011, I had no idea what to expect of the two months I was to reside in the Himalayan hill station in India. The first few days were dizzying; Dharamsala is place with incredible diversity. Tibetan, Hindi, English, German, French, and Hebrew could be heard at any given moment. It is easy to be swept up in the flurry of popular activities such as language tutoring monks and nuns, Buddhist meditation and lectures, yoga, rock-climbing and hiking. Every once in a while, one can catch a glimpse of the Dalai Lama or even attend one of his free teachings at his temple. Dharamsala, after all, is the current residence of the Dalai Lama.

Every year, Tibetans risk their lives in crossing inhospitable mountain passes to escape an even more inhospitable government. Their destination is not only the home of the Dalai Lama but the Tibetan Government-in-Exile. Despite its many distractions, Dharamsala is a meeting point for so many people with a common plight and purpose. Even as a visitor, it is easy to become similarly motivated to contribute to the Tibetan struggle for basic freedoms in their homeland.

It is in this context, that I joined the staff at the Tibetan Centre for Human Rights and Democracy (TCHRD). TCHRD is the first Tibetan non-governmental human rights organization to be established in exile in India. As my main task, I researched academic journals, law documents, government publications, and investigative reports to develop the “Civil and Political Rights,” “Freedom of Religion,” and “Development” sections of an annual report on the Tibetan situation in China. My contribution to TCHRD’s Annual Report is set to be published at the end of 2011. Aside from being professionally rewarding, given the breadth and complexity of the assignment, my work at TCHRD was also intellectually stimulating.

Ultimately, it was difficult to stay very long in Dharamsala before even the most abstract research became informed by real-world experience. I have been humbled and inspired by my personal interactions with TCHRD staff, members of the Government-in-Exile, refugees at the Tibetan Refugee Reception Center, local residents including monks, nuns, and activists, visitors, and NGO volunteers. I am grateful to The Forgotten International, through which I received the funding that made this experience possible.