Living On A Dollar A Day 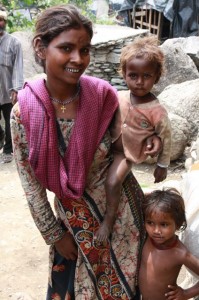 Living on a Dollar a Day is a book and documentary project which will, in words and images, tell the stories of the women, children and families around the world who work long hours, sometimes under dangerous conditions, to earn not much more than a dollar each day.

Through this project, The Forgotten International’s (TFI) hope is to bring awareness of the struggles of the poor and of how more than one billion people at the bottom of the economic ladder work so hard just to stay alive. TFI also wishes to discredit the myth that many who are poor are simply lazy or worthless. Hopefully, this project will help many to realize that poverty is often a condition that is symptomatic of forces outside the control of the poor, and that the chasm that exists between the daily living conditions of the poor and those of the rich, is simply unacceptable.

A Pulitzer Prize winning photojournalist, Renée Byer, and a videographer, George Rosenfeld, are traveling on behalf of TFI to a minimum of 10 countries to capture these stories. They are currently finishing their travels in Asia which included visits to India, Bangladesh, Thailand and Cambodia. Their next destinations are going to be two countries in Africa, three countries in South America and some stories from Eastern Europe.

Our Work in India

Shortly after our team’s arrival in India, we moved to our first story which involved the sewer workers in Delhi. We decided to do this story because, of course, one of the objectives of this project is to focus on some of the terrible jobs that many people around the world are forced to do largely as a result of their economic status. In India, and somewhat unique to that country, employers still use human beings as tools to clean the sewers of large cities or to clean out open latrines in the countryside or to sweep human feces from cement slabs that people use to relieve themselves in areas of the country where toilets don’t exist. These jobs are given only to the lowest caste in India who have been called “untouchables.” The Dalits of India make up about 16% of the country’s population or about 180 million people. It is dehumanizing work. Work they have been forced to do largely because many in India feel that because of their caste they are the only ones who would be fit for such work.

Sewer workers, of course, get paid very little and sometimes die from the gases they are exposed to in the sewer pipes of Delhi and other large cities. Not only do these sewers contain human waste, but often are filled with cockroaches, rats and chemicals that are both harmful to their skin and body. These workers go into these sewers with no protective clothing and remove the waste with their hands, a shovel and a small bucket.  The photograph to the right is of one such worker who’s being hosed off after diving into and cleaning out a sewer. 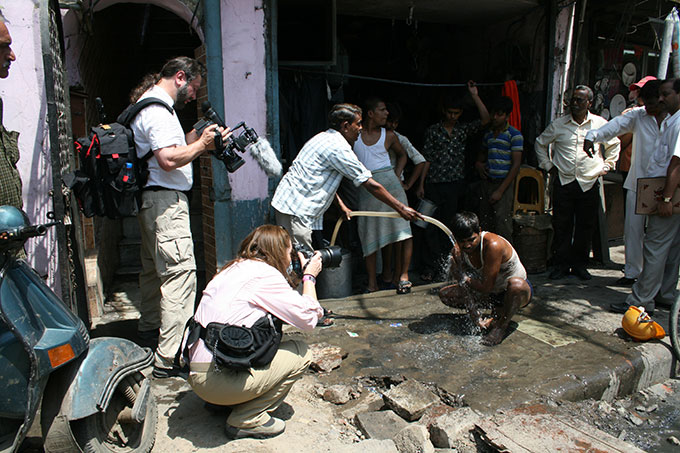 Below is the photograph of the sewer he just entered to clean. It is filled with sludge and human waste. This type of work is actually illegal in many areas in India. Nevertheless, the law has not caught up to the practice and local governments are still trying to figure out how to deal with sewage in cities with decaying infrastructures and populations that are out of control.  No one should be forced to do this kind of work simply because they are poor and thought to be of less value than other human beings. TFI’s team managed to interview a person who works in one of these sewers. His story will be highlighted in our upcoming book. 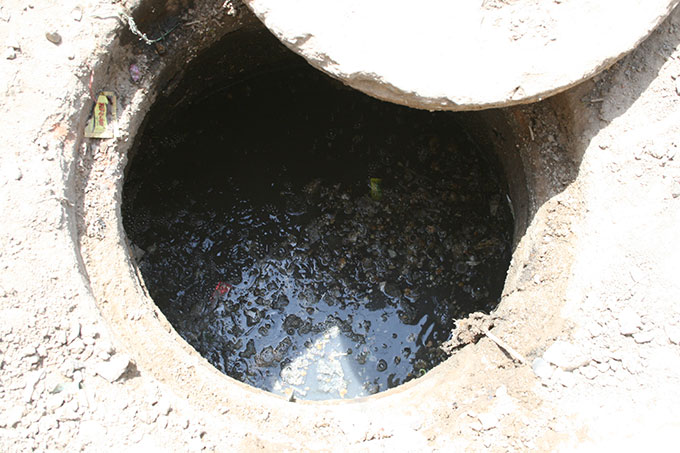 TFI also visited Northern India where, as you can see in the photograph below, our president, Tom Nazario, stopped to visit a small slum on the hillsides of the Himalayas. This slum community is situated alongside a river, the homes are made from not much more than sticks, stones, and plastic tarps. Here, families live by begging and you will often find beggars anywhere tourists congregate. The point of interest for tourists in this part of India is, of course, trekking, spiritual retreats and the home of the Dalai Lama. How beggars live, how much money they make and what impact their poverty has on their children and the opportunities those children may have in future is what we focus on in our book. Many millions around the world live on begging and often make far less than a dollar a day. It would be gross negligence on our part to create a book about the world’s poor and not mention this population. In this photograph, Tom Nazario waits on line with children at the slum who will get their hair combed after just being given a shower by one of the volunteers. Two hundred children live in this small slum and on a 110 degree day, a shower is one of the few pleasures these children have. 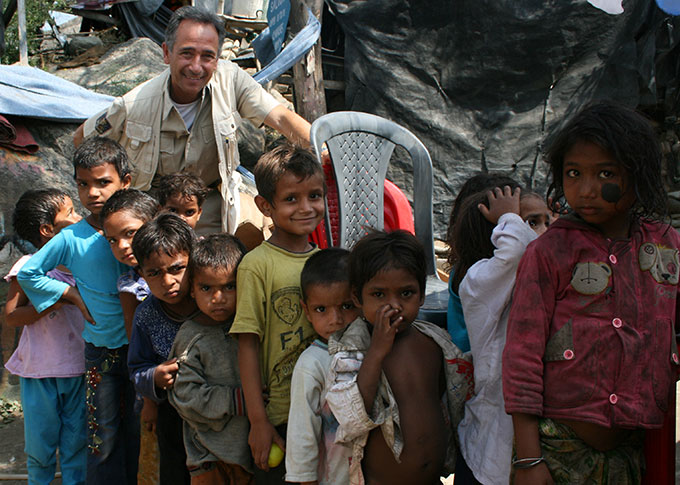 Other stories we’ve chronicled in India include the story of a young blind girl who begs on the street of New Delhi in order to support her mother and younger brother, women who build roads and structures by hand, slum dwellers who are being evicted from their homes as developers take over cities, and street vendors who sell trinkets or provide services to passersby in the hope to make enough money to buy food for their families.

Please take a moment to visit our Facebook page. Thank you.